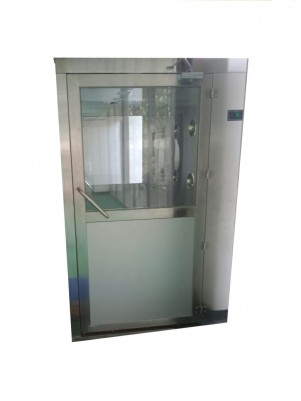 An air shower system is designed to function as a sort of gateway controller between your cleanroom and the rest of the world. When it is used properly, a clean room air shower can cut down on a vast majority of potential contaminants and helps ensure that your product remains safe and uncontaminated. Today, air showers have become relatively commonplace because of their benefits, and comparatively small price. So what exactly does the term clean room air shower mean, and why does your cleanroom need one?

HOW DOES A CLEANROOM AIR SHOWER WORK?

Well, first let’s start with how a cleanroom air shower works. Essentially, it functions as a high velocity, low pressure, self-contained system. To clarify terms, the air shower is the actual high-velocity airflow fan that turns on once the employee is in the room, and the room itself, with dual locking doors, is called the air lock. For the sake of brevity, we will refer to the system as a whole as an air shower.
In a one-person air shower, the airlock has two doors that cannot be opened at the same time. The employee enters the room from the outside, the doors lock, and then the air shower begins blowing air in what we call a “flapping manner,” or high-velocity streams. These streams of air effectively “scrub” the employee of any lingering particulate, blowing them to the low-pressure side of the room. Typically, an employee will be cleaned for 4 to 8 seconds, and then will wait for an additional 2-4 seconds for the room to be purged of the contaminants. The second door, leading to the actual cleanroom, will then be unlocked, allowing the employee contaminant free entry into the production area.
Most smaller cleanrooms equipped with an air shower simply implement a one-person air shower, but cleanroom air showers do exist for many employees at once. These larger air showers are built kind of like tunnels and are beneficial for operations that have a shift change of 30-40 employees at a time.

WHY DO YOU NEED A CLEANROOM AIR SHOWER?

Well, if you think about it, why wouldn’t you? A cleanroom air shower provides your product and your employees with an extra layer of protection from any harmful contaminants or particles that could make their way into your cleanroom. One instance of too much particulate can result in a ruined batch of pharmaceuticals or a malfunctioning piece of electrical equipment. An air shower functions to prevent these major issues from happening. They’re also a helpful reminder to employees about the importance of remaining particulate-free. And on the off chance that an employee wasn’t as careful as they should have been when donning a gown, an air shower will help ensure that any extra particulate is scrubbed off before they enter a contaminant-free space.

IS A CLEANROOM AIR SHOWER WORTH THE COST?

It always comes down to the bottom line. Clearly, air showers are effective, but are they worth the additional cost? Well, believe it or not, an air shower actually adds up to just a tiny percentage of an overall cleanroom installation fee. Compared to the rest of the cleanroom that you’re paying for, the cost of a cleanroom air shower is simply minuscule. Add that to the fact that if an air shower prevents even one contamination of a pharmaceutical batch, you’re saving way more than the air shower even cost you, making its price a very small concern. If you’re in the following applications, an air shower can save you big bucks in mistakes and contaminated product:
• Biotech
• Biomedical
• Parental drug
• Microelectronics
• Precision manufacturing
• Pharmaceutical
• Aerospace
• Nanotechnology
In addition to the money an air shower saves you in product consistency, cleanroom air showers have also proven to increase cleanroom efficiency, and lower the amount of particulate buildup within the cleanroom itself. Since the air shower is ensuring that as much particulate as possible is eliminated before anyone enters the cleanroom, less particulate buildup occurs over time. This means that a cleanroom with an air shower will require less maintenance than a cleanroom without. It also means that a cleanroom with an air shower will put less stress on HEPA filters–making them more efficient–since they won’t have to work as hard with additional particulate and contaminants.
No matter the cleanroom application, an air shower is guaranteed to decrease particulate and the presence of contaminants. And when it costs just a fraction of the price of your cleanroom itself, it’s a practical addition to your project. If you have more questions related to cleanrooms, or if you’re considering adding an air shower to your new or existing cleanroom project, make sure to give the experts at Accumax India a call! We’d love to answer any questions or help you design a cleanroom that’s perfect for your application, your space, and your budget.