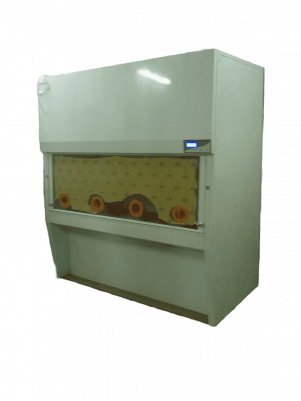 A Biosafety Cabinet (BSCs) provides protection from airborne contamination by particulate matter. The most important need for protection is the lab technicians operating the BSC. The cabinets prevent viruses, spores, and bacteria from infecting personnel. Not only does this prevent injury or illness among workers, but it reduces potential liability on the part of the organization that owns or runs the lab.

Biosafety cabinets also help protect the environment of the lab. Potential contaminants are kept within the cabinet and filtered from discharged air, so they do not pose a risk for personnel or a source of contamination for work located elsewhere in the lab.

BSCs are ingenious in their design. By using relatively simple mechanisms that rely on the physics of fluid dynamics, these devices maintain barriers to contamination while still allowing the physical access that allows people to do their work.

THE PHYSICS BEHIND BIOSAFETY CABINETS

BSCs can seem passive because the most important tool of their effectiveness, air, is invisible. To better understand how Class II containment works take a short review of some basic physics.

Fluids that are not under compression move without gaps through a channel or pipe. The fluid does not bunch up in some places or stretch thinner in others, even when the cross-section of the channel changes. The same volume of fluid must flow by each point. When the channel grows larger in cross-section, the fluid slows, because the volume is directly proportional to both that cross-section and the speed at which fluid moves past the point. Similarly, when the cross-section shrinks, fluid moves more quickly, so the same volume per time flows past. In the 18th century, Swiss mathematician and physicist Daniel Bernoulli applied the conservation of energy to fluid flow that led to the Bernoulli Equation and Bernoulli principle: When a fluid flows through a channel, fluid pressure, fluid speed, and channel cross-section are all directly related. So, when the channel size decreases, the fluid speed increases. Increase the channel size and the fluid speed decreases. Increase the speed and leave the channel size the same and the pressure decreases. The principle is what lets the airfoil of a plane create lift on the wing. It also lets a Class II biosafety cabinet operate and protect personnel, product, and the environment.

A Biosafety cabinet  is a box with a blower moving air within. A transparent panel on the front allows personnel to see inside. An opening at the bottom of the panel lets technicians reach in and perform work. This is known as the window sash.

As the blower drives air through the box, the BSC becomes a study of fluid dynamics involving the Bernoulli principle. The moving air column lowers the pressure, creating a negative pressure area about air pressure in the lab.

Even as someone works with hands placed through the bottom of the window sash, air flows from the lab environment into the cabinet through that opening and into an air grill at the front of the cabinet. The air supply creates a moving air curtain in front of the work opening. Because of the negative pressure in the cabinet, air does not move outward through the opening into the lab so long as the person moves hands and arms slowly to avoid disruption of the air curtain.

All or part of the air pulled through the cabinet may be vented out after passing through a HEPA filter. Depending on the BSC type and work being done, the filtered air may move into the lab or can be directed through venting to the building’s exhaust system, eventually to be carried outside. Although they can screen particles from the air, the HEPA filters cannot remove volatile toxic chemical vapors or volatile radionuclides that might be generated.

Contamination of work within a BSC, while rare, can still occur. The concept of laminar and turbulent flows explains the issue and the solution.

When a fluid, like air, flows past, over, or around an object, it can do so in one of two ways. One is in a turbulent flow, where eddies, whorls, swirls, and other disturbances tend to mix the fluid. If the air movement in the cabinet were a turbulent flow, airborne particulate matter or vapor could move between parts of the work area and contaminate other samples or processes.

The second-way air can move around an object is called laminar flow. A laminar flow reduces to a minimum both turbulence and the potential cross-contamination it can cause as the air moves smoothly past objects in their path.

Class A1 cabinets are currently used infrequently. Class A1 BSCs are intended for routine microbiological work without the generation of chemical vapours. The cabinet has a minimum inflow speed of 75 linear feet per minute at the access opening on its face.

The air supply passes through one HEPA filter creating particulate-free air drawn by a blower. 30 percent of the air circulated in the cabinet moves through a second HEPA filter and is vented out of the cabinet. In comparison, the remaining 70 percent is directed through the first HEPA filter and recirculates through the cabinet. Laminar airflow prevents cross-contamination of items in the workspace. A Class II A1 BSC should not be used with volatile toxic chemicals because vapors' build-up can create safety hazards.

Intended for routine microbiological which either generates no chemical vapors. Applications that generate minute amounts of chemical vapors such as compounding chemotherapy drugs can be used with an A2 BSC if run with a canopy connection to an external exhaust. The A2 is similar to the A1 except with a minimum inflow speed of 100 linear feet per minute at the opening on its face, creating greater negative pressure and improving containment

How does a Class II, Type A2 Biosafety Cabinet Work?

Intended for routine microbiological work with a generation of minute amounts of chemical vapors, so long as the generation does not interfere with the flow of air or the work is done at the rear of the cabinet, where the airflow is 100% exhausted. The cabinet has a minimum inflow speed of 100 linear feet per minute at the opening on its face. The air supply passes through a HEPA filter for particulate-free air, drawn by a blower. Of the air circulated in the cabinet, approximately 70 percent moves through an exhaust HEPA filter and is vented out of the cabinet while the remaining 30 percent passes through the supply HEPA filter and recirculates through the cabinet. Laminar airflow prevents cross-contamination of items in the workspace.

How a Class II, Type B2 Biosafety Cabinet Works

The type C1 cabinet is similar to a type B1 cabinet in terms of airflow pattern. The cabinet exhausts approximately 60% of the work zone airflow through a dedicated portion of its centered depressed work tray/grill pattern. It recirculates the remaining airflow, approximately 40% of work zone airflow through the non-dedicated portion work tray grill area. However, what makes the type C1 cabinet different from type B1 because it has an internal exhaust motor/blower to push the airflow through the exhaust HEPA filter. Traditional type B1 cabinets require the facility's exhaust system to pull airflow through the exhaust HEPA filter and thus require a direct connection. This new style cabinet is more like a type A2 concerning exhaust in that it can be exhausted back into the room or through a canopy exhaust connection. In terms of exhaust requirements, type C1 will use a bit more exhaust volume than type B1. Type B1 requires a bit more negative pull or static than type C1.